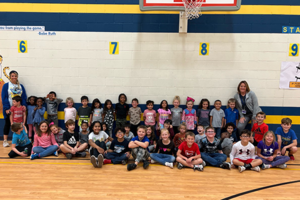 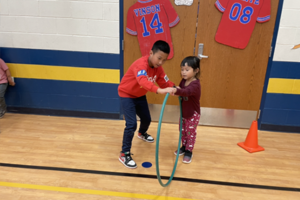 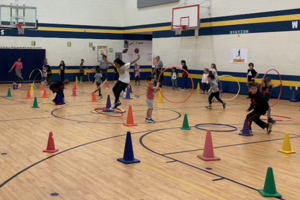 As pre-kindergarten students at Oak Ridge Elementary learn about keeping their bodies healthy, they joined the fourth graders for a P.E. lesson.

Fourth graders at Oak Ridge Elementary had the opportunity to demonstrate their leadership skills earlier this month in P.E. class. As a reward for exceptional behavior in class, fourth graders got to partner with pre-k students and lead them through a typical P.E. class.

They started the class out with stretching and running with their partner, then transitioned into a game called ‘Hula Roll’. This game required the students to roll the hula hoop from a designated spot from the perimeter of the gym. If the hula hoop landed around the cone the pair got to collect the cone for a point.

The pre-k and fourth grade student pair took turns rolling their hula hoop into the playing field. In addition, they had to dodge all the other rolling hula hoops while collecting theirs. If one of them were hit by another team's hoop they had to perform 10 jumping jacks, called a heart reward, before continuing.

Pre-k classes do not have a scheduled P.E. class, so they had been learning about keeping their bodies healthy and the importance of movement in class. The pre-k teachers asked Melaney Barecky-Vison, the P.E. teacher at Oak Ridge, if they could do a mini lesson with them.

“They had a blast” said Barecky-Vison. “80 plus kids working together all while being heart healthy!”

Many of the fourth graders had a great time with the younger students stating, "it was the best day ever!"