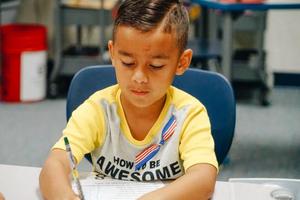 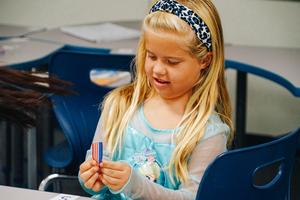 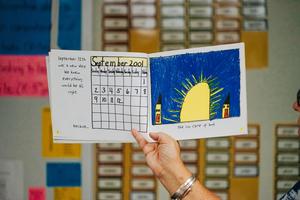 First graders in Shelly Reid’s Reading Intervention class at Upland Heights Elementary learned about the events of 9-11 this week.

Reid began the class by holding up simple, one-word signs. She asked the students what they thought the words meant as she helped them sound them out and find the syllables. These words included things like anniversary and memorial, and even a few words that are hard to hear, like terrorist and hi-jack.

“In my opinion, content is not age appropriate, it is how you present the content," Reid said. "I believe that even though these students were not alive in 2001, they still need to know what happened. They need to understand why there are people talking about it, why they might be seeing American flags everywhere, and just to help them understand our world.”

Reid said that throughout the past 20 years, she has incorporated a lesson on memorializing 9-11 during this time.

“I think it is the simplest way to be mindful and to honor our country,” Reid said. “I see 48 kids in a day, so that is 48 people that I get to share this with. That is 48 opportunities for my students to become better Americans.”

At the end of the lesson, Reid read her class a book called “September 12” that was illustrated and written in 2002 by first graders at H. Byron Masterson Elementary in Kennett, Missouri. The book talks about how even though they were scared, and things were uncertain, the sun came up the next day and that group of kids knew that everything would be alright.

Reid explained the book as she read, emphasizing that even when things seem scary or hard to handle, everything will be okay.

“My job is to teach my students better reading skills,” Reid said. “My responsibility is to help make my students good human beings.”

The class ended with Reid instructing students to create their own memorials in remembrance of 9-11. Each student tied red, white, and blue ribbon as Reid walked around the class to pin them on their shirts.

As Reid led her students out of her classroom, she reminded them that today they would be walking memorials and that they could also share with people that even when things get tough, everything will be okay.